A National Academy of Sports Medicine (NASM) certified trainer of 10 years and former bodybuilder, Taylor is also a certified P90X and Insanity trainer and Level 2 Parkour trainer, among other things.
“I transitioned into Ninja Warrior about 5 years ago and have a hybrid style of fitness between Ninja Warrior training and competing, Cross Training, OCR (Obstacle Course Racing) training and competing and still do some Insanity workouts for cardio/endurance. I now coach and train clients from (age) 3 to adults in Ninja warrior, functional fitness, and OCR,” Taylor said.

With such a strong fitness and athletic background, Taylor designed his facility not only as an obstacle course race and fitness training facility but a group event venue that has become popular for its Ninja Warrior-themed birthday parties and summer camps. 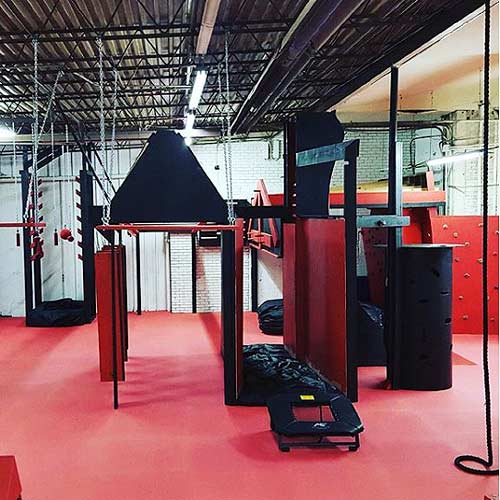 At Bolivar Warrior Sports, he used Greatmats Pro Taekwondo Martial Arts Mats which are made of 20 mm thick EVA foam. When equipping his new gym he opted for a slightly thicker and more dense flooring in Greatmats 1 inch thick Martial Arts Karate Mats.

“I was happy with them from that location (Bolivar) and the pricing/selection options at Greatmats was great,” Taylor said. “It is the base layer of our facility so I wanted it to be pretty thick. I wanted something with cushion, of course, but also wanted something that would provide good traction for obstacles and fitness classes and could stand up to a lot of traffic. Being able to easily replace a mat tile was also appealing. After researching some reviews it seemed like it would be a good choice.”

After using the martial arts flooring for three years, Taylor says, “They have held up very well to a LOT of traffic. We have hundreds of kids and adults on our facility floor weekly, and outside of one mat location that gets a huge amount of traffic we haven’t had to replace any mat tiles to this point.”

The one mat that has become damaged is at the bottom of his 8 foot warped wall that has hundreds of kids a week sliding and running up and down on it. In this case, they have worn through gray surface layer, into the blue core.

“The nice thing is, it should be an easy fix when we do it, just pulling up the individual mat piece and replacing it,” Taylor said. “Overall, we have been happy with our floor. Everyone I have dealt with did a great job.”
Jon Taylor
Republic Warrior Sports
https://republicwarriorsports.com/
Republic MO 65738 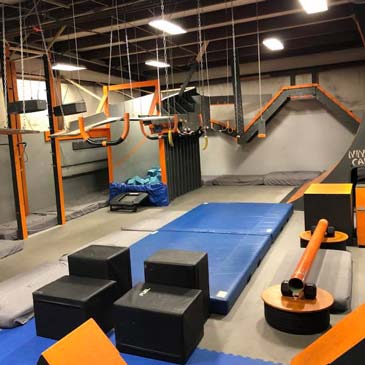 How to Install Playground Flooring Tiles How Can I Protect A Golf Simulator Ceiling?