Related Product: Gymnastics Competition Landing Mats All Sizes
When it comes to good karma, gymnastics coaches Steve Zamzo of Detroit Lakes High School (Minn.) and Valorie Kondos Field of UCLA have an abundance. Both highly accomplished in their respective leagues, Zamzo and Kondos Field were also recently nominated for Greatmats National Gymnastics Coach of the Year Award for the positive impact they've had on their communities. The duo compiled a combined 3,000 votes to make the finals in the contest. With an outpouring of community support, Zamzo rose to the top become the 2018 Greatmats National Gymnastics Coach of the Year. 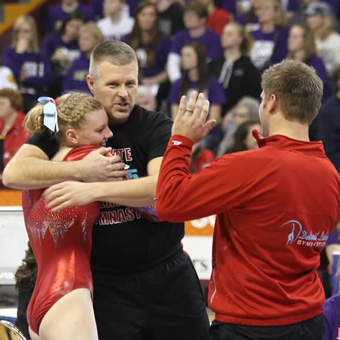 ''Much of their success is due to the culture of caring and respect that he has created within his program,'' said Detroit Lakes Activities Director Rob Nielsen. ''They go out of their way to act in a manner that reflects positively on our community and program. Many times you will hear of programs that are very successful that are not liked throughout the state or by opponents. I think if you asked any coach in the state of Minnesota, they would be impressed by the level at which our girls compete, but I bet virtually everyone of them would tell you about how our girls act and treat other competitors.''

Coach Zamzo says he believes in supporting one another, whether it is his own team or his competition and strives to emulate the excitement generated by college teams with all of the cheering.

''It's a big risk, going out individually in front of a large group, knowing that more times than not, you're going to fail,'' Zamzo said. ''It’s hard work. Gymnastics isn't easy.''

Zamzo first took over the Detroit Lakes program about nine years ago when it was on the verge of shutting down if it couldn't find a coach. While he had experience as an assistant coach several other places, this was his first gig as a head coach.

Zamzo first learned of is nomination for the national award from a coworker who congratulated him on his way in from recess. Surprised by the nomination, Zamzo said, ''To think about somebody that was speaking about me was very humbling - that they thought enough of what I have done to take the time to nominate me... I was very honored and humbled by that. I didn't realize how many people we connect with through our team.''

Seeing people asking their classes, classmates, friends and family to vote for him brought Zamzo a new sense of pride to know people were looking out for him in that way.

''It's exciting. This group of kids that I've been working with... for me to gain any recognition is all due to them and the things that they have done throughout their careers,'' Zamzo said.

''The contest is really kind of fun,'' he added. ''You hear from people that you haven't heard from in a while and see people that you know, but you get to connect with a little bit more. That's kind of neat. Our kids work extremely hard. I'm very proud of what they do, what our assistant coaches do to help them. As long as I can get the bus there on time, I'm doing a good job. It's just nice to be recognized and have the communication with the people in our gymnastics community.''

As the winner of Greatmats National Gymnastics Coach of the Year Award, Zamzo will have the option of choosing either $250 worth of Greatmats Gymnastics Mats or $150 in cash for the Detroit Lakes High School gymnastics Program. 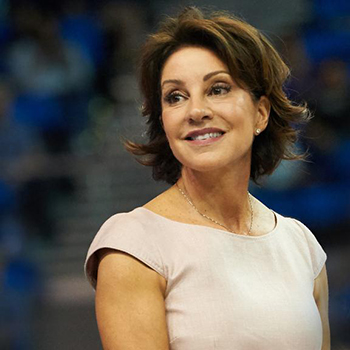 After 36 years in East L.A., seven NCAA championships and more than 500 regular season victories, Miss Val has nothing left to prove as a UCLA gymnastics coach. But that doesn't mean she'll be abandoning the philosophy that has gotten her to where she is today.

''I focused on integrity and character and because I focused on that, we won,'' Miss Val says. ''It's never been about winning. It's always been about how can we develop into the best superheroes we can be and make a positive impact on the world. Life is so much more fun when you challenge yourself to be a superhero everyday.''

A dancer by nature, Miss Val entered her coaching career without any gymnastics background.

She says it's really just about living each day and committing to doing the little things to the best of your ability without worrying about results, what people say and think, or how you look to other people.

''One of my greatest gifts as a coach is that I could never have an ego because I didn’t know anything,'' Miss Val said.

With the platform of a being a prominent coach, Miss Val enjoys using athletics to teach tough life lessons that young people don't learn in the classroom. Part of that is teaching people to appreciate life and help others.

''Who cares how many gold medals you win if you do'’t do anything with that platform for substantial change,'' she says. ''I believe wholeheartedly in community outreach.''

She and her athletes have a reputation for speaking to a large range of organizations - regardless of size or demographics. They advocate for sexual abuse victims, raise money to feed homeless college students, play games and read stories with hospitalized children among other outreach activities.

''This job has taught me more about myself and challenged me to practice what I preach at a level I would not have had without it. Most of the things we complain about are first world problems,'' she said. ''Let's stop b____ing and moaning about everything that's horrible and how much we hate each other, and let's start looking at our commonalities and how we can use our differences to make each other better.''

After being diagnosed with breast cancer nearly four years ago, Miss Val came to a realization that we all have an expiration date, and decided to move up the priority of checking things off of her bucket list - which was waiting for her retirement.

''I just have so much to do and I want to do it while I have the energy to do it,'' she said. ''I don’t need to win one more championship. I don’t need any more celebrity. I'm very fortunate I can retire financially so I want to go do stuff that is going to challenge me in a different way now.''

''I didn't grow up in this world of winning and bragging rights,'' she added. ''I don't connect with 'Haha! We beat you!' ... We need champions in life. If you do the little things every day, you'll be very pleasantly surprised as to what it culminates into. That's why I was really pleased to be nominated and a finalist for (the Greamats National Gymnastics Coach of the Year Award) because it's a big deal. It doesn’t matter which level you're coaching. We college coaches, we get a little be more notoriety because we're on TV more than high school coaches, but we're still doing the same work.''

What Is A Cheese Mat Used For In Gymnastics, Dance or Cheerleading? The Best Gymnastics Mats - How to Choose

How Large Do Folding Mats Get? The Cost of Gymnastics Mats

What Mats Are Used For Cartwheels? What Size Cheese Mats Are Best For Cheerleading?