Related Product: Horse Stall Mats Kit 3/4 Inch x 12x12 Ft.
Tara Gandomcar-Hieb of Cottonwood Riding Club in Littleton, Colorado, has become a horse stall mat connoisseur of sorts after being in the horse business with her family for the last 35 years.

She and her sister, Erica, recently took over the family business, the largest boarding facility in the state of Colorado, which is home to more than 170 horses on the riding club's 93 acres.

''We're second generation at this barn so a lot of what we're doing now is updating the barns that were built 25 years ago,'' Tara said. ''We're a large boarding and training facility, so we have two box stalls,'' Tara said. ''Those have the old non interlocking mats.''

When we revamping the breezeway barn, which has open sides, it discovered Greatmats' interlocking stall mats.

''There are no shavings allowed in that barn,'' Tara said. ''I needed something to protect the horses from laying on the gravel and still not slip around on the ice. The non interlocking mats peel up and curl up the edges, so the horses were tripping and people were tripping.''

''I love the interlocking mats,'' Tara said, which led her to use them again when they built a new barn in 2016. ''It's easier for my guys to clean. It's better for the ladies walking around. The horses - they're not tripping and have less thrush and foot issues.''

''Every stall has it's own little drainage system,'' Tara said, noting that the cleanliness of her facility is one of the reasons its become the most popular boarding facility in the state. Adding the interlocking stall mats has helped keep the reputation in order.

''Before, the stalls were not completely matted - Mats in front and dirt in the back.'' Tara said. ''That definitely made that barn more sellable. Having the horses on a completely matted surface. It just looks cleaner so it's more appealing. ... Shavings and dirt and everything get underneath the corners of the non interlocking mats.

Another big selling point for Gandomcar-Hieb was the fact that the Greatmats stall mats came with 12 year warranty.

''It was a dollar per square foot more expensive than the non interlocking mat, but worth the expense in the long run,'' Tara said. ''It's nice to have the new technology.''

''Our first barn was sort of the test for it and we've definitely noticed that that is an easier situation,'' she added. ''You can go to a feed store and get mats that are a dollar a square foot cheaper, but you're going to be fiddling around with it every year. It's less labor. Labor is time and time is money.'' 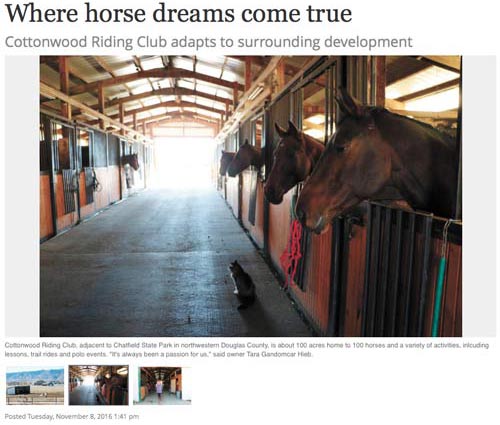 To learn more about Cottonwood Ride Club, read this article published in the Littleton Independent or visit its website.

Do Donkeys Need Stalls & What Size Should They Be? The Best Sizes For A Goat Stall