Ballistic Rubber - Why Would You Use It?

Related Product: Ballistic Rubber Tiles Black 1-1/2 Inch x 2x2 Ft.
When you say the words “ballistic tiles,” many people immediately jump to the conclusion that the tiles must be bulletproof. While ballistic tiles are intended to be used in the same area as bullets, being bulletproof isn’t exactly the purpose of the thick rubber mats.

Ballistic tiles are most commonly used in shooting ranges or indoor tactical shooting areas. As most indoor shooting ranges are typically in some sort of warehouse type of environment, they can be quite loud. This rubber is designed to be installed on floors, walls and in some cases even ceilings to reduce the noise of firearms indoors and reduce the risk of ricochets.

Greatmats ballistic rubber flooring and wall tiles are made of 1.5 inch thick recycled rubber with different design functions on either side.

If you primary concern is noise, installing the rubber squares with the grid surface out will do the most for dampening that noise. If you’re concerned about ricochets, keep the flat side out.

These shooting range surfaces are designed to accommodate numerous rounds of ammunition being fired into the tiles and offer self healing functionality for repeat use. While most bullets will go through the tiles, especially at close range, they provide significant resistance to the ammunition and help prevent the bullets from bouncing back at the shooter when it hits a solid wall behind the tiles.

Greatmats ballistic rubber wall panels and floor mats are made from non-vulcanized rubber, reducing that rubber odor and allowing for a thicker rubber material.

While this ballistic rubber is designed to reduce ricochet, it is also designed for high velocity rounds of ammunition and should not be used for air rifles or BB guns as the BBs will not have enough mass and velocity to penetrate the tile in most cases and will likely bounce back.

It’s also important to keep in mind that the rubber mats are not designed to go against the design of the ammunition. For example the entry side of the tile may survive hollow point bullets and self heal just fine, but you will see more damage to the tile where the bullet exits when hollow point rounds are used. The ballistic rubber is also not designed to withstand incendiary ammunition.

If a shooting warehouse is beyond your capabilities, but you're looking for a good surface to tack you targets to, these make a great self healing surface, just make sure you still have a good backstop, because while they slow the bullets, they will not stop them completely.

All shots were fired from 25 feet away. All of the pistol rounds caused little to no damage to the tiles. Most of the BBs fired from the Air Rifle bounced off the tiles. (Others became lodged at the entry point of the tile.) Both forms of ammunition fired from the 12-gauge shotgun produced notably different results. The rifled hollow point slugs did leave noticeably larger holes at the entrance point and significant damage at the exit point. The wads from the 7-½ shot either traveled through the tile or became lodged inside of the 1 ½ inch thick ballistic rubber while the rubber mats did stop the pellets.

Tracer ammunition was used for the .45, .40 and 7-½ shot for greater visibility.

Watch the video above to see the results. 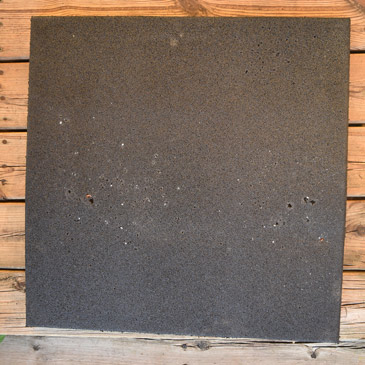 For more on this topic please review our Ballistic Tiles product page.

Is Rubber Flooring Suitable For Leg Exercise Machines? When Would You Want Virgin Rubber Gym Flooring?

Are Rubber Mats Recyclable? What is a rubber mat used for?